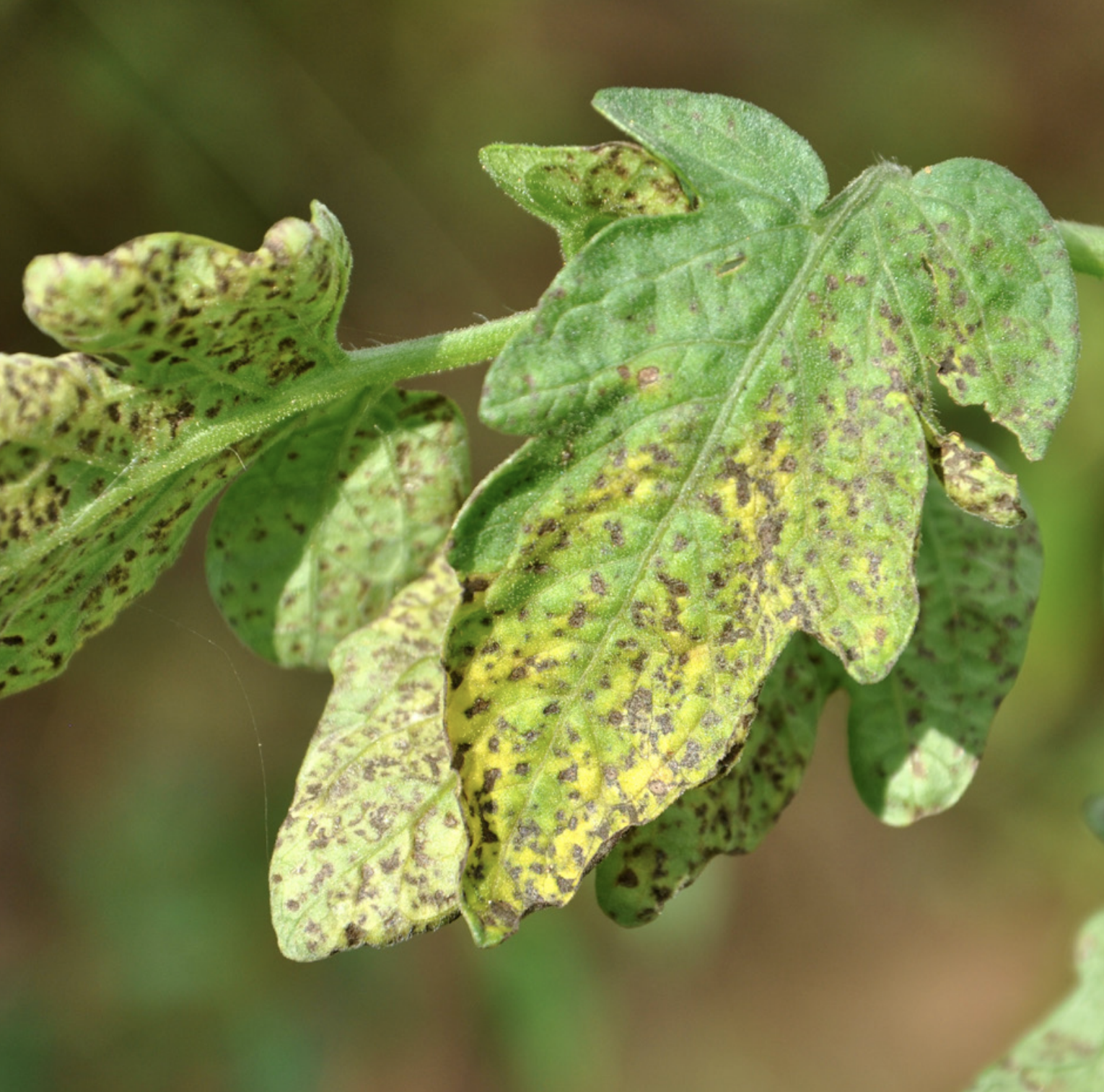 Symptoms are the manifestation of disease expressed as a result of pathogen activity in the host plant. In some cases, pathogens produce structures like mycelium, spores, sclerotia, pycnidia, etc., on the surface of the infected parts. These are called ‘Signs’, e.g., mildews, rusts, etc. There are mainly three types of morpho- logical symptoms. Necrosis – Killing of plant tissues. Hypertrophy and hyperplasia – Over- development. Hypotrophy and hypoplasia – Under development and stunting.

Necrosis means death of cells, tissues and organs due to pathogen activity. Most destructive type and damage is irreversible.Almost all types of pathogens (fungi, bacteria, viruses, etc.) cause necrosis. Following are different kind of necrotic symptoms.

The most common necrotic symptoms that occur on leaves, floral parts and fruits.

They are well-defined localized areas of usually brown or tan necrotic tissue.

These spots may be surrounded by margins of purple or some other dark color.

When dark threads of a fungal pathogen are seen on the spots, it is called ‘blotch’.

Sometimes fungal spots are raised and then they are called ‘tar spots’.

‘Shot hole’ spots are those where the dead and collapsed tissue shrink and fall off leaving a hole inside a spot.

Initially, browning of infected plant parts occurs and then extensive death happens in a rapid manner.

The dead tissues soon disintegrate and give burnt or scorched appearances.

Scorch resembles blight, but the scorch occurs in irregular patterns usually along the margins of leaves, and, sometimes between the veins.

Scald is the blanching of epidermal and adjacent tissues of fruit and, occasionally, of leaves.

A ‘Canker’ is really a symptom of an injury often associated with an open wound that has become infected by a fungal or bacterial pathogen.

Citrus canker caused by the bacterium Xanthomonas axonopodis is one of the more common diseases.

Infection causes lesions on the leaves, stems and fruit of citrus trees, including lime, oranges, and grapefruit.

Severe necrosis of twigs or branches happens from the tip and advances downwards Citrus canker caused by the bacterium Xanthomonas axonopodis is one of the more common diseases. towards the base is called ‘die-back’ or ‘stag head’.

The symptom often becomes apparent during the dormant season or shortly thereafter.

Species of Colletotrichum (Chillies), Botryodiplodia (Mango), Phomopsis (Neem) and other fungi cause this symptom.

This fungal disease affects many plants, including vegetables, fruits and trees.

It can spread very quickly during rainy seasons.

Anthracnose is a general term for a variety of diseases that affect plants in similar ways.

These spots darken as they age and may also expand, covering the leaves.

On vegetables, it can affect any part of the plant.

On fruits, it produces small, dark, sunken spots, which may spread.

In moist weather, pinkish spore masses form in the center of these spots.

Eventually, the fruits will rot.

On trees, it can kill the tips of young twigs.

It also attacks the young leaves, which develop brown spots and patches.

It can also cause defoliation of the tree.

Stripe is also elongated necrotic area but confined to leaf tissues between the veins, particularly in monocots.

Ring spots are the common type of symptoms produced by virus pathogens.

They are characterized by the appearance of sometimes chlorotic but mostly necrotic rings on the leaves or also on the fruits and stems.

The ring spots may be present singly or in groups developing concentrically on infected parts.

Rots represent dead and decomposed tissue on various parts of the host plant as a result of maceration and disintegration caused under the influence of various enzymes secreted by the pathogen.

Though the rotting may result due to nonparasitic causal agencies, the great majority of rots are caused by fungal or bacterial pathogens.

All parts are prone to rots and they are

Wilt is usually a generalized secondary symptom where leaves and shoots lose their turgidity, become flaccid and finally droop (wilt).

Normally this happens due to blocking of xylem vessels by the pathogen itself or by substances secreted by it.

Wilts may be sudden without yellowing (bacterial wilt of solanaceous crops) or gradual, partial and slow wilt with yellowing of leaves and finally total wilt as in the case of Fusarium and Verticillium wilts.

Plants also wilt because of rotting of roots and stems.

These are the characteristic symptoms of rust fungi.

All rust fungi are obligate pathogens.

Though they are common on leaves, they can be found on stems also.

Normal colour of the pustules is red or yellow, however, brown to dark colors are also not uncommon in fungi belonging to Basidiomycetes.

Pustules may be of whitish colour in white rusts caused by Albugo candida under Oomycetes.

And may be red in red rust caused by Cephaleurus parasitica, a green alga

Refers to the abnormal secretion or oozing out of watery or slimy products from the affected plant parts, which may or may not set into hard masses.

It is the major symptom of some fungal diseases.

Citrus gummosis, Gummy stem blight in Cucurbits and stem bleeding in Coconut and Arecanut are some of the examples.

Sudden collapse of seedlings specially in nursery bed or tray.

Fall over of the seedlings due to weakening of the base of the stem.

Species of Pythium and Rhizoctonia are the common fungi that cause this.

Mildews represent the chlorotic or necrotic areas generally covered with sporulation of the fungal pathogen.

There are two types of mildews namely ‘Downy’ and ‘Powdery’.

Downy mildews are caused by a group of Oomycetous ‘fungal’ pathogens belonging to family Peronosporaceae.

Downy mildews occur on both monocots and dicots.

However, under severe disease condition, the cottony growth and sporulation can happen on upper surface also.

In some cases the infection will occur on floral parts and even on fruits.

In cereal Downy Mildews, phyllody of the inflorescence (green ear) is also caused.

Powdery mildews are caused by fungi belonging to Ascomycetes and family Erysiphaceae.

Powdery mildew is the most common disease occuring on a very large range of crops.

The symptoms are typical and very easy to recognize owing to its powdery appearance.

They produce chlorotic or necrotic areas covered superficially growing mycelia and fructifications of the pathogen.

Black minute fruiting bodies are also visible at the end of the season.

Hyperplasia and Hypertrophy (Over Development)

Many pathogens, through their biochemical activity induce hormonal imbalance.

This results in excessive growth of host tissues and causes abnormal increase in size of affected organs.

It is brought about by one or both of the two processes known as hyperplasia and hypertrophy.

Hyperplasia is the abnormal increase in the size of plant organs due to increase in number of cells by increased cell division rate.

In hypertrophy the increased size of the organ is due to increase in the size of cells of a particular tissue.

Galls are localized enlargements on various plant parts in the form of small pustules or warts, larger tubercles, tumours or masses of cells making a morbid outgrowth of either fleshy or woody texture, in which host tissues and pathogens unite.

Knots may be fleshy or woody in their texture.

These symptoms represent irregular and extensive wrinkling and furrowing of leaves due to reduced growth of veins in comparison with the growth of laminar tissue resulting in sunken veins and raised up laminar tissue leading to the curling of the leaves.

In some diseases, infected cells and tissues slowdown in development resulting in the infected plant parts thereof being arrested in their growth as a result of degeneration of the cells (hypotrophy) or subnormal cell divisions (hypoplasia).

Destruction of or inhibition of chlorophyll formation is called chlorosis.

The leaves with less chlorophyll appear pale green or yellowish in color.

Extreme case of chlorosis is ‘blanching’ or ‘bleaching’

Chlorosis is commonly caused by viruses.

The infected leaves generally become narrow due to reduced growth of laminar tissue, but the veins and midrib remain normal in growth.

Refers to the reduction in size of either the whole plant or a specific plant part.

It results in reduced size and loss of vigour.

Stunting may be caused by viral, bacterial, fungal or nematode infections.

Insect or mite feeding can also cause stuntingor dwarfing.

Even abiotic factors like lack of water, imbalance of soil nutrients, excess light, chemical or mechanical injuries can cause stunting.

Stunting due to abiotic factors can easily be corrected.

Rosetting means shortening of internodes of the infected plant along with the clumping of the foliage together at the apices of branches.

Fasciation also known as cresting, is a relatively rare condition of abnormal growth in vascular plants.

Fasciation may also cause plant parts to increase in weight and volume in some instances.

The phenomenon may occur in the stem, root, fruit or flower head.

Some plants are grown and prized aesthetically for their development of fasciation.

Transformation or Replacement of Plant Organs

In case of smut, the ovary is transformed into structure containing smut spores.

In ergot disease, the ovary is invaded by the fungus and transforms it into scelotial body.

In Udbatta disease of Rice, which is also called false ergot, the seeds become pseudosclerotia.

This is a serious mycoplasma disease of Brinjal.

The leaves of the infected plants in the early stages are light yellow in colour, reduced in size and are malformed.

Disease affected plants are generally shorter in stature bearing a large number of branches, and leaves much much smaller than healthy plants.

The petioles get shorter considerably, many buds appear in the axil of leaves and internodes get shortened thus giving the plants a bushy appearance (rosetting/ witches broom symptoms).

Flower parts are deformed leading the plants to be sterile.

Infected plants do not bear any fruit.

However, if any fruit is formed it becomes hard and tough and fails to mature.

However, they can occur on leaf, stem and roots.

They are caused by Basidiomycetes belonging to order Ustilaginales.

Smut infected tissues are either destroyed or replaced by black smut spores or they are first stimulated to divide and enlarge to produce a swelling or gall of varying size and then destroyed and replaced by smut spores.

Corn, Sorghum, Wheat and Rice are the common smut hosts.

The honeydew can drip down onto the upper leaves making them sticky.

Often pollen and anther sacs adhere to the honeydew.

Udbatta disease or incense rod disease is also called ‘False Ergot of Rice’ as it is not Ergot in real sense.

Phyllody refers to the development of floral parts into leafy structures, generally caused by virus or Phytoplasma infection such as aster yellows.

However, in case of Downy Mildew of Finger millet, Pearl millet and Maize (male tassel) the inflorescence can show phyllody.